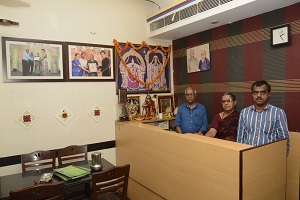 Besides providing mouth-watering delicacies, Sundarams also ensures that the food stays light and nutritive, punctuated with some of the choicest enriching Indian herbs.

What started as a fun in their home to entertain their friends in the evening soon become an outdoor catering venture for small parties that was eventually followed by the successful launch of multi-location South Indian Food chain rearing to expand in other cities in the country.

Mr. S. Sundaram, the promoter, who hails from Tanjore, Tamil Nadu moved to Chandigarh in 1977 to work with a media house. His wife soon became popular for her South Indian cuisines and encouraged by friends, she started an outdoor catering at a modest scale in 2001. In 2002, Mr. Sundaram quit his job and launched their first South Indian restaurant in Sector-35, Chandigarh. The growing popularity led them to move into much larger space in Madhya Marg in Sector-26, Chandigarh in 2008. Later, Sundarams opened South Indian Food joints at Aroma Sector-22, Chandigarh and 3 B-2, Mohali.

This journey of Mr. Sundaram’s passion and his wife Uma Maheswari’s exemplary culinary skills along with friends’ heartfelt encouragement has finally led to the establishment of an exclusive South Indian Food chain that has now become a household name to reckon with.